Something utterly spectacular can happen in Yosemite National Park during the latter part of February.  There is a small, ephemeral waterfall named Horse Tail Fall that tumbles from the top of El Capitan toward the valley below.  During late February, if conditions are just right, the last sunlight of the day can make the waterfall glow appearing as a ‘firefall’. The watershed area that supplies the water for Horse Tail Fall is only about 30 acres in size. For the event to occur, there must be adequate snow pack in that area and it must be above freezing for the waterfall to flow. Lastly, the sunlight must be unimpeded by clouds as is strikes the waterfall at sunset.

Last week I set out for Yosemite hoping to witness and photograph this unique spectacle. I had decided earlier in the winter this was the year I would go, since there had been so much snowfall in the Sierras. The forecast, however, did not look promising. Rain or snow was predicted every day for the week that I was prepared to stay in the park. When I arrived Wednesday, I had a brief window of nice weather to get out and photograph some of the park scenes. By lunch the clouds had rolled in and I wondered if the trip would be a bust. As the afternoon wore on, people began to pack in at various viewing spots along the Merced River. It was still quite cloudy, but we hoped for the best. When the time arrived for the potential firefall, there was a slight glow to the waterfall, but nothing of a spectacular nature. Oh well. The weather forecast for the next day was dreadful. Many hoped there would be a timely break between storms such that conditions would be better on Friday.

I awoke Thursday to continued pouring rain. Yosemite Valley was drenched. Standing water was everywhere. The rain continued through the morning but then came to a stop. Of course it was still overcast. After a bit, there was a slight amount of blue sky to the east. Then a little more. I hopped around the valley shooting whatever I could where a nice sky was in the background. Eventually it began to clear in the west. I returned to the viewing spot along the Merced River where I waited the day before about two hours before sunset. I waited with friends I met the day before. Occasionally some clouds obscured the sunlight, but most of the time it was clear to the west. 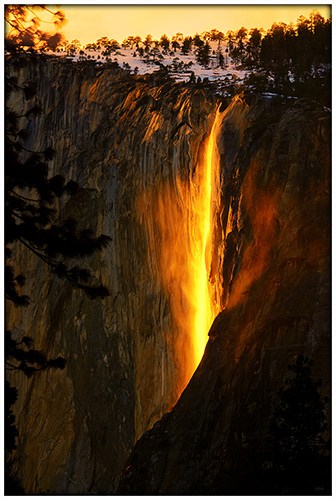 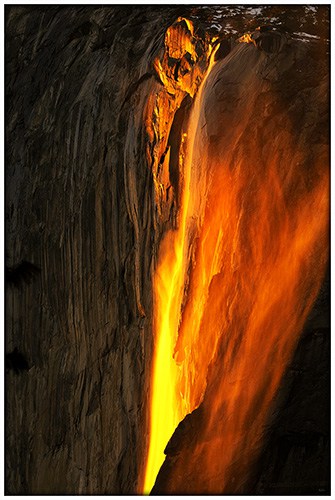 I would like to extend special thanks to Norman and Karen from Sacramento, with whom I chatted several hours on both afternoons. They are Yosemite veterans and were kind enough to share their park experience with me helping me to get the most out of my trip.