Alpenglow and the Bear

I decided to spend the sunrise yesterday morning at Oxbow Bend in Grand Teton National Park, with the intention of getting the early morning alpenglow light on Mt. Moran. After getting up at 4:30 and making some coffee, I headed in the dark to the spot from my nearby camping area. When I arrived, there was only one other photographer there and I had plenty of time, so I grabbed my entire backpack, tripod and coffee and found my spot along a trail quite close to the car. Normally, I get everything I should need and carry the gear on a Lowepro vest. With plenty of time to set up, I carried the whole pack thinking I’d figure out what I wanted to do while I set up. After setting up, sipping coffee and taking a couple of test shots waiting for the light, I heard someone in the parking lot say, “bear, bear” in a calm, quite voice. I actually thought someone was calling their dog. After I heard the lady say it again, I turned around and a young grizzly was behind me staring as if to say, “when are you going to get out of my way.” In my still caffeine-deprived state, it took a second or two to register, and then I grabbed the tripod with camera and hopped down the trail to the river. I didn’t take time to zip up the backpack. Although I had most all my camera gear, bear spray was sitting in the car. So I looped along the river to get to the car, and the bear went straight for the gear I left behind. After grabbing the bear spray, I contemplated approaching to get my stuff. The other photographer had moved where he could see the action and told me the bear was chewing on the backpack. Fortunately there were no ‘food rewards’ associated with the backpack, just expensive equipment. A couple of minutes later, the bear started back up the hill and I went to survey the damage. The pack was a bit muddy, with one small poked hole. The bear pulled out a flash unit (SB900), decided it was uninteresting and dropped it unhurt. I doubt I would have been so lucky had he grabbed an expensive lens first.

After the excitement, this was the intended alpenglow shot. I did fire off a couple of the bear, but at ISO100 with the mirror up in the dark, so they were quite fuzzy. Anyhow, in the future I’ll go back to keeping gear on my vest, along with bear spray. This bear had no intention of hurting anyone and just wanted me to move. The next bear may be different. 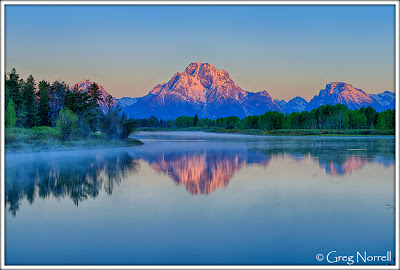