Yellowstone is the world’s oldest national park, established in 1872. It is the centerpiece of the Greater Yellowstone Ecosystem, which is one of the last remaining, nearly intact ecosystems in the northern temperate zone of our planet.  As such, a trip to Yellowstone is more than just adventure; it’s like a trip back in time to experience nature hundreds or even thousands of years ago. Since a trip to Yellowstone is as close to using a time machine as you’ll get, don’t forget your camera.  I’ll provide some potentially useful information regarding wildlife and landscape opportunities below.  But first, a quick note on safety  during time travel.

Yellowstone is the wild. It is not a petting zoo or a theme park with safeguards. Careless individuals experience unfortunate outcomes all too commonly in Yellowstone.  So remember a few rules and safety guidelines. First, maintain a safe distance from wildlife. Park rules specify staying at least one hundred yards (91 meters) from bears and wolves, and twenty five yards (23 meters) from other wildlife. It’s the visitor’s responsibility for maintaining an adequate distance.  So if you’re enjoying the view in a comfy camping chair at your nice campsite and a bison walks through, you’ll want to get up and get out of the way.  Not doing so resulted in one gentleman’s helicopter flight to a trauma center in 2012. While most visitors (but not all) are cautious around bears, bison and elk can be very dangerous too.  Every now and then a video will get posted online showing someone who failed to grasp the risk of approaching a wild animal. Once I saw a clip in which the parent shooting the video could be heard telling his kids to “go ahead and pet him.”  As for bears, having a canister of bear spray is a good idea if you plan on any amount of hiking.  And it should be pointed out that bears occasionally are present in areas with lots of people, such as Old Faithful or Lake Village.

Wild animals aren’t the only danger in Yellowstone. The landscape itself can be as treacherous as it is beautiful. When in thermal areas, do not leave a designated boardwalk or trail.  Doing so may result in a shower far too hot to enjoy or falling through the delicate surface into bubbling mud.  When walking near cliff edges, stay on trail and away from the edge.  Much of the rock in Yellowstone is hydrothermally altered and can easily break away. The result of this hydrothermal activity is a spectacular canyon in the center of the park. Hiking along the canyon provides spectacular views, but there usually are no guiderails and stepping off the trail to get a better view can be disastrous.  With those safety considerations in mind, let’s talk photography.

When visiting Yellowstone, you’ll almost certainly encounter spectacular wildlife.  Where you go in this huge park will determine what you might see (and photograph). For grizzly bears and wolves, the best bets are the Lamar Valley in the northeast part of the park, and the Hayden Valley south of the Canyon area. Sightings are more frequent in early mornings and evenings, but can occur anytime, and pretty much anywhere.  When driving along the Lamar Valley, you’ll likely encounter a group of wolf-watchers somewhere just waiting for wolves to emerge from where they were last seen.  Grizzly sightings are more common in spring and early summer. Late in summer, grizzlies usually have moved to higher elevations for different food sources.  Other places to look for grizzlies include Dunraven Pass, south of the Tower area, particularly along Antelope Creek, and along the east entrance road between the park entrance and Yellowstone Lake.  Black bears are quite common around Tower Fall and the northern road between Mammoth and Tower Junction.  When driving along the northern loop of the park and you encounter lots of cars pulled off on the roadside, it’s likely a ‘bear jam’, with a black bear munching on vegetation near the road.

Bison (commonly called buffalo) are a common occurrence in both the Lamar and Hayden Valleys, but can be seen anywhere in the park.  In spring and early summer, they are commonly in the roadways, since walking along the paved road is easier than tromping through the last of the winter’s snowpack.  Bison are huge animals. Be careful and patient if they are in the roadway in front of or beside you.  While it’s not uncommon to see a lone bison lounging in a meadow, they usually are in herds.  Watching a herd cross the Yellowstone River in the Hayden Valley on a summer evening is an experience not to be missed.  The mating season (rut) for bison is in August. During that month, the males can get testy so stay clear.

Moose are less frequently seen in Yellowstone than in years past, probably due to the re-established wolf population.  The Willow Flats area south of Mammoth is prime moose habitat and a good place to look. Also keep an eye out along waterways in the northeast corner of the park. Opportunities to photograph moose are usually better in the Tetons, just south of Yellowstone.  Elk are present throughout the park, but are particularly common around Mammoth Hot Springs (they like the manicured grass the park service maintains by the housing). They are also common south of Norris and along the Madison River in the western part of the park.  The elk rut is in September, when it’s not uncommon to see a couple of males competing for a nearby group of lady friends.

For bird watchers, Yellowstone has hundreds of species. Bald eagles are sometimes visible along rivers, such as the Madison, Yellowstone, and Lamar Rivers.  A nest used to be present right along the road by the Madison River near the west entrance, but that pair has moved to a new nest farther south of the road.  Golden eagles are often spotted along the Lamar River, along with osprey.  Great horned owls and great grey owls are elusive, but may sometimes be spotted where dense forest meets an open meadow.  One particular great horned owl has been known to hangout in Mammoth Hot Springs by the housing. 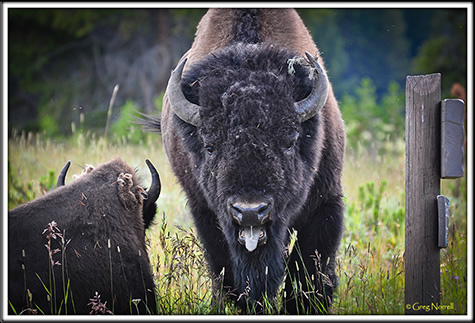 Yellowstone has a diverse array of landscapes, from dramatic and exotic thermal vistas, to spectacular canyons, to  lush open valleys and lake scenes.  Geothermal activity is present all through the park, but most of the viewing is in the western part of the park, from Old Faithful north to Mammoth Hot Springs.  The surreal appearance while walking (on designated trails) through the Norris geyser basin is amazing. Old Faithful is the most popular spot in the park, but there are numerous other geysers nearby worth visiting.  My favorite view in the park is of Grand Prismatic Spring from the top of a ridge just south of the spring, accessed by climbing the hill from the Fairy Falls Trail. 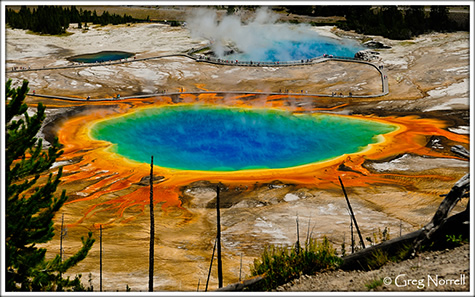 There literally are hundreds of waterfalls. Some are easy to view while many more are only seen by those willing to endure long hikes. The largest waterfall in the park is Lower Falls in the Grand Canyon of the Yellowstone, with a tumble of 308 feet. It can be viewed and photographed from a number of locations on both sides of the canyon. Mornings are best for even lighting. On still summer mornings, a rainbow is often present around 10:00 am from Artist Point, Red Rock Point, and Lookout Point.  If you’re up for a short, but steep hike down into the canyon, try Uncle Tom’s Trail which descends 500 feet into the canyon for a close view, often with an excellent rainbow. Other waterfalls accessible without hiking include Tower Fall, Gibbon Falls, Undine Falls, Rustic Falls, Upper Falls, and Firehole Falls. Fairy Falls and Mystic Falls are accessible via relatively short hikes.  For those up for longer, more difficult hikes, visit Osprey Falls and/or Union Falls for spectacular views well away from the crowds. 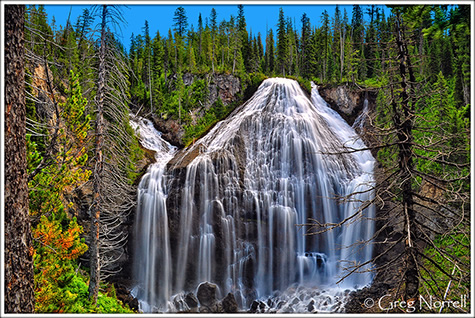 Yellowstone has numerous lakes, with Yellowstone Lake being the largest and easily accessible.  Watching the sunrise over the lake is worth getting up early in the morning.  Lakes such as Shoshone Lake and Heart Lake are accessible for those willing to hike into the backcountry.  Smaller lakes such as Clear Lake in the Canyon area, and Isa Lake southeast of Old Faithful can provide nice views with floating lily pads that bloom in early summer.

Visiting Yellowstone is a great experience for millions of people each year.  Indeed, there are many people who travel long distances every year to satisfy what they call “Yellowstone Fever”.

Hopefully the above information can be useful  for those planning a future trip. For more information and photographs from Yellowstone, please visit Yellowstone Photo Art and my blogs.